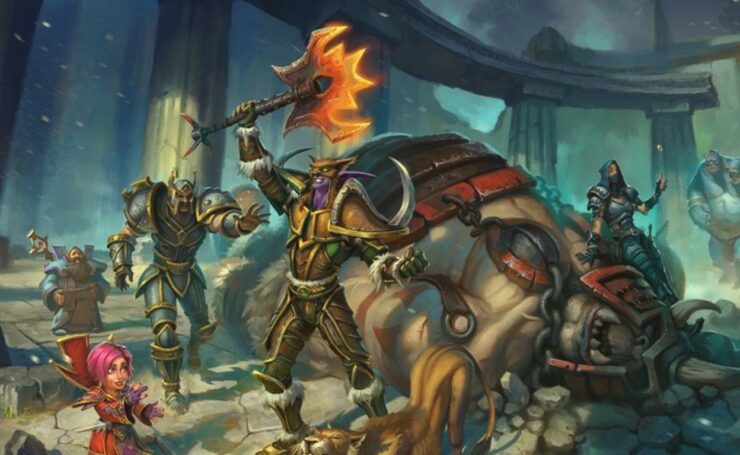 Dueling in World of Warcraft is where a consensual confrontation between players in PvE happens. There are specific rules and etiquettes to follow. There are many instances when a player with fewer skills challenges somebody else who has more experience than them.

Overall, if you choose to engage in a duel, it would show how good your reflexes are when you face unexpected challenges. One can easily analyze how well different classes work within the game. They would know how to tackle different challenges, which will equip them for later stages in different environments. In this article, we would be mentioning some of the easiest ways to improve your dueling skills in World of Warcraft.

How to Begin The Duel?

Without knowing the basics of dueling, one cannot hope to improve upon their skills. To first begin with a challenge, you will have to right-click on the player portrait of the opponent you want to challenge. Select dual from all the options to send a message. Another way to begin a duel is by targeting a character portrait and typing /duel.

However, just because you have challenged someone does not mean he would accept. The actual action will only begin after both the players have consented to the confrontation. When the opponent accepts the challenge, a battle flag will indicate the area within which the fighting occurs.

If the challenge is accepted, you will get a small countdown to get ready. The basic objective of dueling is using your skills to reduce the opponent to 1 hit point. Another way to win will also be driving the player out from the restricted area for the fight.

If any of the players stray too far from the battle flag, they will get a warning. Both of them are required to stay within the boundaries. If you have limited skills, it might be a good tactic to drive the opponent out of the duel area. For beginners, it is quite difficult to win against an experienced player.

1. Use All the Tactics

As a player, one needs to gather all the honor they can get. In classic WoW, there are a total of 14 military-style ranks that one has to cover to boost their skills. It can only happen if one wins all the fights. In such a case, it is better to use the basic techniques in an efficient manner.

One of the tactics to use is to choose a stun and turn it into a grenade. It is a PvP tactic and will work great in dueling. This trick was popularized by using a Nova on the opponent and then attacking immediately with a grenade. The reason why there needs to be back to back attacks is that you want your enemy to be incapacitated and not retaliate. When we say to use stun as a grenade, it is not only for damage but also for stunning so that they cannot react.

Since the opponent is stunned, they will not be able to react right away, and you will get some buffer time. Irrespective of the class, any player can extend this time by incapacitating their enemy and prolonging this duration. For instance, the druids can use the entangled roots and turn them into grenades. The priest works on fear and turns it into a grenade.

Regardless of the class of the player, one thing to master in PvP is casting dark runes. Dark or demonic rules can be acquired through demons. In case one is facing a mage, and they have attacked, you can cast a dark rune. It falls under the same spell batch and will be great to protect your character by increasing the mana. It will damage the character, but it will also break free of the polymorph.

However, this is a very tricky way to win a duel because you are voluntarily causing damage to your health. One should be confident that this trick will bring them close to a win. Otherwise, using a dark rune or demonic rune might keep you at a disadvantage. It is only useful if the player is completely confident of a good result. But remember that it can also backfire.

Probably the easiest way of becoming the master of duels is by getting a boosting service to help you out. One can look at their achievements and get different packages based on their class. A Mythic+ Dungeon Boost offers multiple gears and skills that will help in dueling.

With this boost, there will be ease of upgrading through different levels. For players who do not have time and want to boost their skills, a boosting service will be a good choice. For more specifications and package details, you can see what https://buy-boost.com/wow/wow-mythic-plus-dungeons-boost offers.

5. Stall For Some Time

This is another way to win in duels and make the most of your skills in World of Warcraft. The player who popularized it would stall the fight and scatter traps for their opponent. His idea was to slowly rot their opponent. He was also taking a drink of mage water, getting mana, and running.

It was used repeatedly, which is great for different player classes. For instance, while facing mages, one can use this strategy. It will get you away from the range of polymorphic while regenerating your mana. So, you can cast fireballs in retaliation to the opponent wanting to polymorph you.

Dueling is a great way to understand how a game works. The character will not die in case they lose in a duel. There is no particular downside to engaging in dueling in World of Warcraft which is why it is insanely popular. The players do not lose XP or their gear which is essentially a good deal. However, winning is better because the duel results would be broadcasted to other players in the area.